ONLY WHAT YA WANT MUSIC

You can find your downloads on your Android device in your My Files app (called File Manager on some phones), which you can find in the device's App Drawer

Kirby Gomez is an up and coming Mexican American artist that has gained popularity amongst the ladies as an Urban Pop, and  R&B singer. The Atlanta native currently has two hit singles with Atlantic  recording artist Kap G (DAF & Aint Use To). He states, “Our record, Aint Use To generated over One (1) Million views.” Kirby is produced by the Three (3) time Multiplatinum, Grammy Award winning and ASCAP Honoree producer Mexmanny. Mexmanny is known for his placements with Rhianna, Wale and T.I just to name a few.

His catchy lyrics and hip hop melodies were inspired by recording artist and producer The Dream and of course his producer, lyricist and musical coach Mexmanny.

According to his female fans, “Kirby’s music stands out and it’s refreshing.” Kirby is currently working on his album, and he has already dropped an EP, started touring, and is working toward building  a strong social media following.

COME KICK IT I WAS HERE

You are visitor number: 485 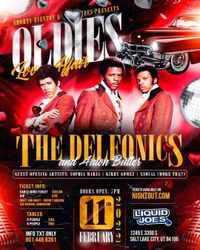 Opening up for the legendary R&B group band The Delfonics